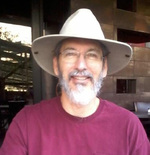 He was a kind and loving man, full of humor and strove to give the world his best work. His artwork brought joy and admiration with its unique, playful style. Dean's art spanned a variety of media but his favorite was mosaic. He was admired by his peers and co-workers in the fine arts as well as the live theater community. Dean's remains will be cremated. Announcements for a public memorial for him will be made after the current quarantine is lifted.

Dean is survived by his husband of 15 years, Peter Thomas; his mother, Diane; his younger brother David as well as his dear friends Hersch, Ward, Greg, Drew and Jonna. He also leaves behind many friends in the neo-pagan and Hellenism community as well as the live theater community of Los Angeles and southern California.