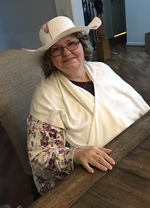 Linda was born on June 14, 1949 in Chicago Illinois to Eleanor and Anthony Iani. She had a special relationship with her grandmother Mary and her two brothers Richard & Tony. She graduated from Immaculata High School in 1968 and was a woman of faith.

In 1979 she moved to California and had an extensive career in the Motion Picture Industry. Her companies include Group W Productions, Columbia Pictures, Sony Studios, PES and finally Extreme Reach. Her role was as a Director of Labor Relations. She had the privilege of meeting John Davidson, Merv Griffith, The cast of Three’s Company, and so many others. Linda was very passionate about her career and treated it as if it was her own company wherever she was at. Her hard work and dedication are just a few of her attributes.

Her hobbies include ceramics, painting, drawing, game shows and playing slots.
Linda is survived by her daughter Stacie, her son in law Rico, her grandchildren Eliana & Enrico of Simi Valley and her brothers Richard Evans & Tony Iani of St. George Utah. Linda was well loved from her family and her extensive number of friends.

Covid circumstances require a family only service that will be held on February 12th. The family apologizes for the private service for we know that many have a special connection to my mother and would otherwise attend. We invite anyone to share any condolences or special memories of my mom at this site. There will be a Mass offered in Linda’s honor April 11th, 10am at St. Mel’s Parish in Woodland Hills. The family hopes as restrictions lift we will be able to honor Linda with a Celebration of Life on June 12th, 2021 place TBD. In lieu of flowers the family has included a link for a donation site. https://www.foundationforwomenscancer.org/support-us/donate/