To share your memory on the wall of Ricardo Apaez, sign in using one of the following options:

Ricardo Apáez was born on September 2, 1973 in San Miguel del Las Palmas, México. He was a brother to five sisters and a son to his parents. He came to the United States in 1990 and lived in the San Fernando Valley ever since. His first job was at Plusko’s Bakery where he met the love of his life, Susana Medina. Several years later, Ricardo and Susana married on April 19, 1997. Soon after that, they had their first and only child: Denise Apáez. Ricardo had a passion for art and birds. He spent countless hours taking care of his beautiful canaries with such gentleness. He was also a hard working man who completely dedicated himself to his family. Ricardo loved to have family gatherings, and always found an excuse to BBQ with his brothers-in-law.

He was a type of man who endured patiently through struggles and trials that life presented to him, and worked through them with courage. One of Ricardo’s greatest triumphs and blessings was his engagement in a relationship with his creator, Jesus Christ, who lifted his and his family’s spirits above and beyond what we could ever hope for or imagine. We were blessed to see that the closer he got to his final day, we were all witnessing a more loving, courageous and spiritual Ricardo, something none of us expected from him. The fruit of it all is that Ricardo left us being a greater father, husband, friend, brother and son. He will be forever loved and missed for exactly who he was.

Psalm 91 : 4
“He shall cover you with His feathers,
And under His wings you shall take refuge.”
Read Less

To send flowers to the family or plant a tree in memory of Ricardo Apaez, please visit our Heartfelt Sympathies Store.

Receive notifications about information and event scheduling for Ricardo

Show you care by sending Flowers

We encourage you to share your most beloved memories of Ricardo here, so that the family and other loved ones can always see it. You can upload cherished photographs, or share your favorite stories, and can even comment on those shared by others.

Gloria & Nicole Flessati, Joshua Carter and the entire Carter Fitness Family, and other have sent flowers to the family of Ricardo Apaez.
Show you care by sending flowers

Jimmy and Chela Garcia purchased the Sentiments of Serenity Spray for the family of Ricardo Apaez. Send Flowers 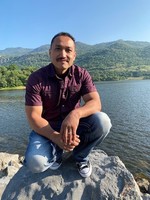