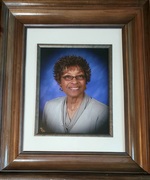 FOREVER IN OUR HEARTS

At a youthful age and losing her mother to a serious illness, Ruth followed her sisters to New York, NY, where she graduated from high school. Years later she found love, in March 1955, united in Holy💍Matrimony to Jesse James Malry. Soon afterwards, she and Jesse relocated to Los Angeles, CA. Aunt Ruth attended and graduated from Vermont Beauty Collage, Los Angeles. With a passion for business, she established and opened Ruth’s Beauty Salon in Los Angeles. Jesse J. Malry passed in1968 while serving active duty in the Merchant Marines (no children). ️

December 1972, Aunt Ruth united in💍marriage to William Guidry. While living their best lives; both retired and moved to Las Vegas, NV, where they faithfully attended Second Baptist Church of Las Vegas. In 2001, William left this life to join our heavenly father (no children).

Due to the Covid-19 Pandemic, memorial service will be announced later.