To share your memory on the wall of Olga Griffith, sign in using one of the following options:

Olga Ometa Joseph, was born on the 18th of July 1936 in Panama, Canal Zone. She was the 8th member of the marriage of George H Joseph and Lucille A Lindsay.
The family live in Gamboa, Canal Zone under the "Gold Roll-Silve... Read More
OBITUARY

Olga Ometa Joseph, was born on the 18th of July 1936 in Panama, Canal Zone. She was the 8th member of the marriage of George H Joseph and Lucille A Lindsay.
The family live in Gamboa, Canal Zone under the "Gold Roll-Silver Roll" law established by the U.S. government, dividing the population between U.S. citizens and non U.S. citizens. Besides that situation at that time, the family was built up with a very strong faith in God, musical skills and athletic abilities. She was schooled in Gamboa Elementary School and afterward finish at La Boca High, where she developed as an athlete in track and field and softball player with her pair tied together Sister Dorothy (decease) guidance of Mr. French.
She loved and played the sport of softball so well which grant her the opportunity to become a pitch and pioneer with other Canal Zone girls to promote this sport for women in the entire nation of Panama.
After her father's retirement, they move to Panama City to the site of Rio Abajo in 1952, encountering with the Spanish having difficulty learning, but that didn't cow her to communicate and become a bilingual person. In 1964 she engages in Catholic marriage to Alfred A Griffith.
She became the #1 pitcher of the Panama Softball selection representing the national jersey in different regional and international matches.
In the Christian Catholic Church devoted to the Virgin Mary, she was a member of the Altar Rosary Society of Saint Vincent De Paul Catholic Church Panama City, also sang in the singing chorus, alto voice of "The Glee Club" and "The La Boca Alumni Chorus" under the leadership of Professor Emily Butcher.
Migrated to the United States of America in 1985 she worked at Burger King with sacrifice and struggle led her to pursue a career to excel and obtain the highest grade in her class that granted her a contract at the hospital and afterward worked as an Assistant Teacher in the school. As a sportswoman she played amateur Tennis and Master Bowling.
She was a member of the Ministry of Communion at Saint Catherine Catholic Church and of prayer groups until the day OUR LORD ALMIGHTY CALL HER HOME.
She had a very strong character, methodical and stern, got her to graduate her 7 children Isa P. Smith, Celia L. Holness (decease), Charles A Joseph, Keith R Griffith, Kim L Bailey, Mirtza I Smith, and Jackie (Marisel) Griffith. She created in them the best values of life and a steady belief in GOD.
She is gone leaving a task of love, peace and mercy to continue to her children, sisters and Brother Claudette, Hazel, Franck and Gloria also to her nephews, nieces, 15 grands and 23 great grands.

Olga you ran the race like Paul and now you look forward for that crown.
GOD BLESSED YOU AND REST IN PEACE IN HIS ARMS.
Read Less

To send flowers to the family or plant a tree in memory of Olga Ometa Griffith, please visit our Heartfelt Sympathies Store.

Receive notifications about information and event scheduling for Olga

Show you care by sending Flowers

We encourage you to share your most beloved memories of Olga here, so that the family and other loved ones can always see it. You can upload cherished photographs, or share your favorite stories, and can even comment on those shared by others. 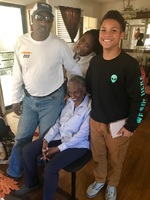 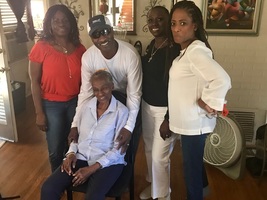 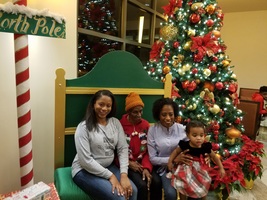 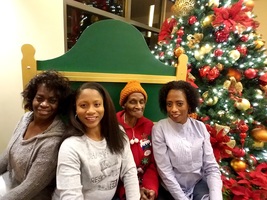